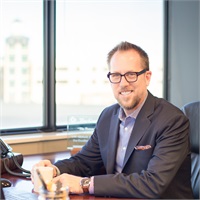 Travis Hart is the President and CEO of Wealth Strategies Group in Colorado. He leads Career Distribution focusing on attracting new talent and the strategic direction of the firm’s field force and leadership team.

Travis has produced a proven track record of industry accomplishments. He quickly became a qualifying member of the Million Dollar Round Table and received a number of other industry and community awards. Travis eventually assumed a leadership role and achieved multiple management accolades. In 2007, Travis opened a new location and focused on building a production and sales team in California. He later relocated to Colorado and became the President and CEO of Wealth Strategies.

Before his time in financial services, Travis built a foundational background in enterprise sales with 11 years at Pepsi Bottling Group.

Travis has been involved in community and industry efforts including; Chamber of Commerce, leadership positions with his local Rotary Club, board member of the local school district education foundation, board member of the local NAIFA organization, Chair of the LAMP speaker committee for GAMA, Vice Chair of the local hospital governing board, and Vice President of the local youth soccer program. Travis has been married to his wife Shana for almost 3 decades and they have 2 children, Sydnee and Trenton. They enjoy cycling, hiking, coaching/playing soccer, lacrosse, and spending time with the family.